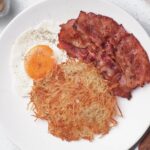 Homemade hash browns in the Air Fryer are so easy to make by using fresh or frozen shredded potato, a little bit of oil, and a light seasoning of onion powder, salt, and pepper. They're perfectly crispy on the outside with beautiful golden color and no heavy grease. Once you make the switch to homemade hash browns, there is no turning back!

Potatoes are always a great side dish to complete any breakfast or brunch. Whether on the side of pancakes, bacon, and eggs or as a part of a skillet meal, it's something my kid orders anytime we eat at a breakfast diner. Especially when we're on vacation!

It's nice to be able to make them at home without buying the ones with all of the unnecessary fillers and ingredients I can't pronounce. The texture is amazing and they are so flavorful thanks to nothing more than a sprinkling of garlic powder, salt, and pepper. This simple side dish comes together so quickly and easily, you'll be looking for reasons to make them. And not just for breakfast or brunch, but for lunch and dinner too!

Why This Recipe Works

If you've ever ordered home fries at a diner and assumed you were getting hash browns or vice versa, you're not the only one who's made that mistake. Some people use the term interchangeably, but they are different, that's for sure.

Home fries are usually diced potatoes that are cooked up in a skillet with sliced onions or pepper. They're cubed, so the exterior gets nice and golden, especially if they're fried and the inside is soft, like a French fry.

Hash browns, on the other hand, are usually shredded potatoes that have has the excess water squeezed out of them to ensure a crispy texture. Some people enjoy them lightly seasoned as is and some people enjoy forming them into a patty (think McDonald's) with a bit of flour and egg for binding.

What type of potato should I use?

There are just so many types of potatoes at the grocery store. Which kind is best for hash browns? Well, it depends...

Waxy potatoes (New Potatoes, Red Bliss) are long or round in shape with thin, smooth skin. They are relatively low in starch and high in moisture. They hold their shape when cooked which means that the hash browns won't fall apart but they also won't get crispy either.

Starchy potatoes (Russet) are long in shape and have coarse skin. They are high in starch and low in moisture. If you're looking for extra crispy hash browns, use these potatoes. The only downside is that the hash browns will fall apart and they won't hold their shape.

In between potatoes (all-purpose, Yukon Gold) they have medium starch and medium moisture. They'll hold their shape and slightly crisp up.

Step 1: Soak freshly shredded potatoes in cold water for 10-15 minutes to help draw out as much starch as possible. Drain the water and squeeze out any excess. Pat potatoes dry with a paper towel. If you're using pre-shredded frozen, soak them in water to thaw and then continue draining and patting dry.

Step 3: Grease the bottom of the preheated air fryer with oil, and fill the tray with shredded potatoes. Using your hands or a spatula, press them down evenly to shape the hash browns. Spray them with cooking spray and air fry them for about 16-20 minutes until golden brown.

Can I double this recipe?


Easily! This recipe can be doubled, tripled, or more. It will take more time because you'll need to cook in batches, but it's doable.

Why are some of my hash browns burnt?


Once you lay your hash browns down in the Air Fryer tray, it's important to make sure that they're in an even layer with even thickness. Thinner areas will cook more quickly and therefore potentially burn.

What other seasoning can I use?


You can use anything from a little cayenne or chili powder for added heat, to smoked paprika for a smoky flare. A little garlic powder along with the onion powder might be nice too. Italian seasoning for a different flavor would be amazing.

Do I need to flip them halfway?


No! Part of the beauty of this recipe is it's hands off once they're in the Air Fryer.

What to serve them with

What comes out of the air fryer, if they've stayed compact, will be one large hash brown. Cut it up into as big or as little portions as you need.

Serve alongside: Eggs, bacon, pancakes, waffles, breakfast sandwiches, burgers for lunch or dinner, or as a fun twist on fish and chips.

Enjoy on its own: with a variety of dipping sauces such as ketchup, garlic aioli, spicy mayo, BBQ sauce, ranch, dill, or whatever is your favorite.

Store any leftover hash browns in the fridge for up to 5 days. They are best served and enjoyed immediately to get that initial crispy texture and they will lose that over time, but they'll still taste great!

To reheat and try to regain some of that crispy bite, place them back into the air fryer to warm through. You can also use a skillet on the stovetop or the toaster oven. If you're in a rush to reheat and aren't worried about texture, pop them in the microwave and you're all set! 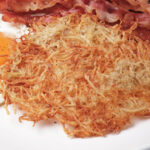 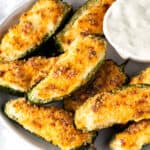 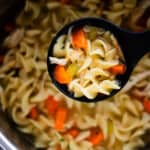